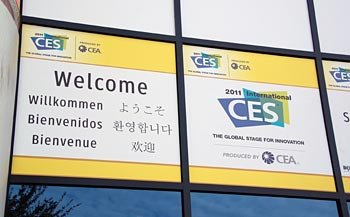 So, fresh from Las Vegas (and with 8 hours of jetlag to get over), here is the news, CES style!

When the immigration office at the US boarder asks you “are you here for the CES?” you know the show must be big, really big. In a town where hotels with 2000+ rooms are commonplace and tourism is a way of life you have to have an almighty event to make such any impression on the, usually uninterested, border guards. CES is just such an event.

This year’s show, held all over Las Vegas, boasted an attendance of more than 130,000 people, a significant improvement over the previous couple of years. While a some folk where there to man 2700 or so exhibitor stands the vast majority where simply there to see new technologies, product introductions and keynote speeches. This year they certainly got what they came for.

Smartphones, connected TV’s (internet connected that is) and tablet computers where everywhere. All shiny, all with newer widgets than last year and most (phones and tablets particularly) aimed squarely at products from the one notably absent ultra brand – Apple.

That aside, it was perhaps 3D television where the battle lines were drawn with most vigour. Every man and his dog had their own implementation of 3D with resultant quality ranging from darn good to the really awful. Key weapons of choice were Passive or Active spectacles technologies, which did battle on adjacent stands. Some (Toshiba for example) even took the customer friendly (but technologically tricky) route of spectacle-less screens.

To this writer though 3D still appeals most on a really big screen (by that I mean a projector) with a corking movie or sports event. For “regular” sized flat-panel TVs and, more importantly regular TV programs, it still feels like a solution looking for a problem to me. For soap operas? Please no!

Of the reported 14 million iPads sold so far, most seemed to be at the show! The Las Vegas Convention Centre was filled with Apple’s tablet computer attached to an endless stream of (as a colleague so aptly put it) “iTatt”. Cases, chargers, stands and an ever growing mountain of interesting Apps mean the iPad, and iPhone for that matter, continue to dominate the portable tech market. Blackberry's Playbook tablet will undoubtedly find favour with some and various Android driven phones will also find success. However, the consistency and customer focus of everything Apple does (including its retail stores) is still far from being beaten. If their approach drives the rest of the industry in an all-out charge of improvement then we all stand to gain.

One rather unexpected theme at the show was that of robotics. The robotic vacuum cleaner has been with us for a while but small robots that could ride a bicycle (or even unicycle in one case) were on display showing what we might expect in future homes. Robots that could wash up were sadly absent.

The most warming and lasting observation from the show however was the unmistakably positive “vibe” coming from visitors and exhibitors. The market is still bleak in places but the feeling of optimism was inescapable. For that reason (among others) it was an event to remember!