Top 10 Takeaways from The CEDIA Conference 2012 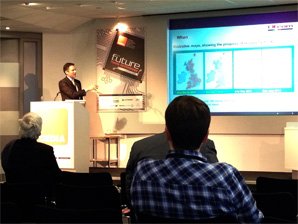 Top 10 Takeaways from The CEDIA Conference 2012

Followers of our Twitter feed may well have spotted some of our "Takeaways" from the recent CEDIA Future of Home Technology Conference . You can only say so much in 140 characters so here, for your delectation, are some expanded explanations of what we considered the key points raised at the conference. Enjoy, ponder and feel free to let us know what you think .

This has been known as the 'second screen', normally a Smartphone or Tablet. But for many (my teenage children for example) the "second screen" is actually the first screen, holding most of their attention. Social media sites, Internet shopping and other such distractions mean we're spending less of the time we’re “watching TV” actually watching the TV. If the TV channels want to stay alive this is a problem they need to be address. As installers we need to think about how the second screen features in the design of our systems.

No surprise I suppose when you think about the geographical diversity of the UK. A solid and affordable approach to covering our Island with next generation Broadband is vital. The cost of the "Gold Standard" of fiber-optic to the home is estimated to be in access of £30 Billion and is simple "off the menu" in the current climate. What we'll actually get is still a matter of deep debate.

Incredible. Cisco Systems predicted a couple of years ago that 90% of all Internet traffic in 2013 would be video. If a single video application can account for 33% of US peak traffic it's looking increasingly likely that they'll be right.

4G mobile data services will be broadcast on the upper channels of the old analogue TV band (800MHz or so). These channels are now empty thanks to all the "Channel Tetris" during the digital switchover and the analogue switch off. However, the close proximity of the new (2013) 4G services to the new Freeview broadcasts (lower down in the 800Mhz band and below) is a problem. But the good news there is that…

The UK Government has set aside £180m to resolve customer 4G vs. TV interference issues

Ofcom are already planning a large "fix it" campaign for domestic TV customers. This could be a simple filter at the TV, at the antenna if a distributed system is in place or, for more extreme situations, an assisted move to an alternative TV service (e.g. Cable or Satalite)

(Figure correct at time of writing). Each game’s sales come from in-app purchases of extra features. They call it the "Freemium" model, enticing people to try with the free version then charging for premium extras during the game. This new financial model has completely changed the gaming market.

Adding complex features to products will decrease its number of users

An important takeaway for all of us that design user interfaces. Many manufacturers are embracing the idea that removing features that confuse users is the way forward. On that note we like to think, “The size of a product’s manual is normally inversely proportional to the quality of its user interface”…

The key success criteria for any new product is user experience

Put simply, if something is difficult to use people won't use it. If they don't use it they won't attach value to it and consider it's purchase a poor decision. And they certainly won’t buy another one!

Wii sold as many consoles as PS3 and X-Box combined

By focusing on usability (involving everyone) and human game play (motion control) over more techie features like HD video and Media Centre abilities the Wii found success with a broader audience, despite being initially considered a "toy" by the gaming community.

The Flat Screen TV market is a disaster

As one industry observer eloquently put it "It's like two drunks playing poker" (the two drunks being a couple of well known Korean brands). The game of poker is ridiculous, a fight to the death of new features, increasing screen sizes and reducing prices. You might think that's great news for customers? Wrong. Many of the features people don't really want (3D on a small TV?) Others are things people don't yet understand or can't use (IP connectivity that their Broadband connection is too slow to support, 4K with no source material etc.). Bigger screens are still limited by the same low-resolution content and look poor as a result. Ironically it’s the useful features (like the sound…) that are often compromised (like the ever smaller, cheaper and nastier internal speakers TVs being fitter lately).

Our final takeaway (No.10) might seem like a 'bad news' story. It is. It's a terrible situation and the average high-street customer is the looser. But to the CI industry it's an opportunity. We know how to get great sound. We know how to deliver great pictures at an appropriate size and we know how to provide simple control of complex features, the way the people actually want to use them. In short, we know how to provide great home entertainment the way customers want it.

So well done CEDIA for putting on one of the most enlightening and thought provoking conferences of recent times. We look forward to more of the same!